Some people with dementia do just fade away peacefully

In this dementia awareness week, I feel it's important to try to make sure that people have a balanced view about the effects of dementia.  I spend a lot of time reading heart-rending accounts of the real suffering of people with dementia and their carers and the final part of the dementia journey is often a dreadful experience for them.

Without denying their experience, I want to share a little information about my mum's journey to show that some people with dementia do remain contented in the 'end of life' stage and die peacefully.

This photo was taken just after my mum's 90th birthday: 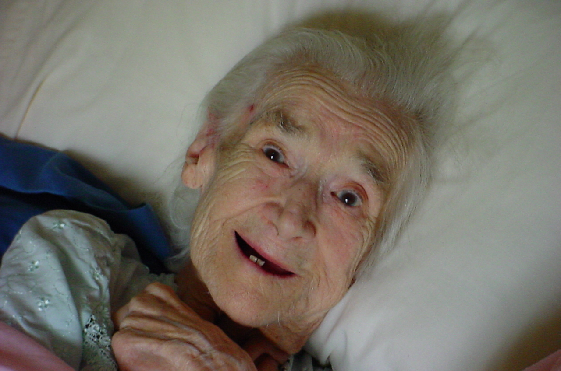 She died 3 months later (AD on the death certificate). At that point she had been bed-ridden for getting on for 2 years. We saw her a few days before she died.  She was still smiling.  Her later years were spent in a Methodist Home for the Aged. Although they didn't normally look after people with advanced dementia, they were happy for her to see out her days in their care because she had contributed so much, always helping new residents to settle in, for example. They looked after her very well. She died peacefully.

She was, comparatively, lucky. So were we.

My wife has dementia. She first attended a memory clinic in 2000, aged 52, and suffered a marked decline in the autumn of 2011. Since then there have been some improvements, despite the fact that she has now (after 12 years investigation) been diagnosed with Alzheimer's Disease.
We try to follow the advice of our Guru: 'Live a Good Life'. It's not easy but there doesn't seem to be any better advice around.
I found myself saying to a friend that I would find my wife's condition very interesting if I wasn't so involved. I've realised now that I do find it, and the issues it raises, interesting. And that there's nothing wrong with that. It's one of the things that keeps me going. Not that I have any choice.
I think more and more that I'm a very rational person (though I'm not claiming that I always behave rationally). I have to try and make sense of things. In my current situation, this is quite a challenge. We all need challenges, they say.
I'm hoping this blog might help me, and maybe others, in some way. If I'm wrong, it won't last very long.
COMMENTS ARE REALLY WELCOME